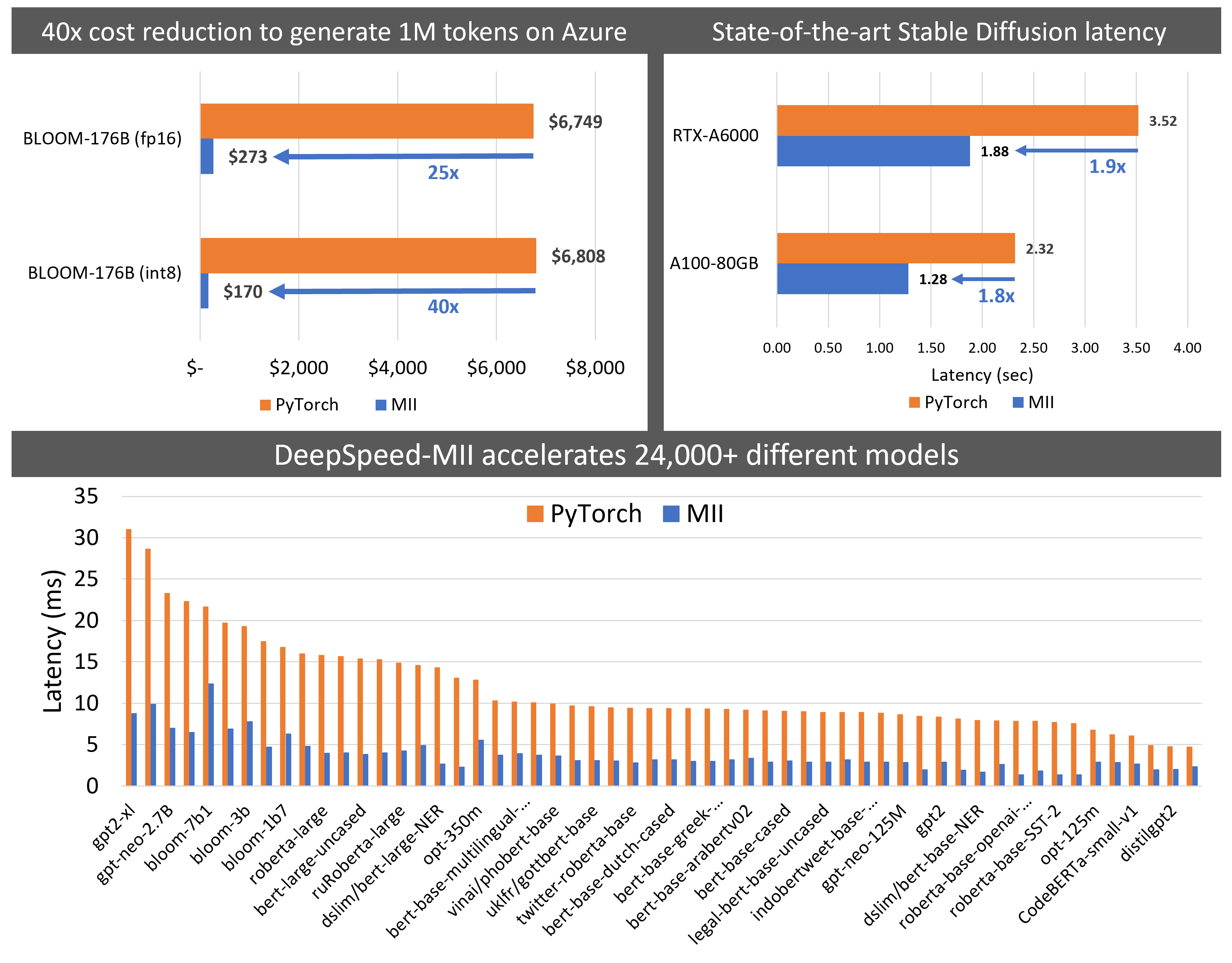 The Deep Learning (DL) open-source community has seen tremendous growth in the last few months. Incredibly powerful text generation models such as the Bloom 176B, or image generation models such as Stable Diffusion are now available to anyone with access to a handful or even a single GPU through platforms such as Hugging Face. While open-sourcing has democratized access to AI capabilities, their application is still restricted by two critical factors: 1) inference latency and 2) cost.

There has been significant progress in system optimizations for DL model inference that can drastically reduce both latency and cost, but those are not easily accessible. The main reason for this limited accessibility is that the DL model inference landscape is diverse with models varying in size, architecture, system performance characteristics, hardware requirements, etc. Identifying the appropriate set of system optimizations applicable to a given model and applying them correctly is often beyond the scope of most data scientists, making low latency and low-cost inference mostly inaccessible.

DeepSpeed Model Implementations for Inference (MII) is a new open-source python library from DeepSpeed, aimed towards making low-latency, low-cost inference of powerful models not only feasible but also easily accessible.

How does MII work? 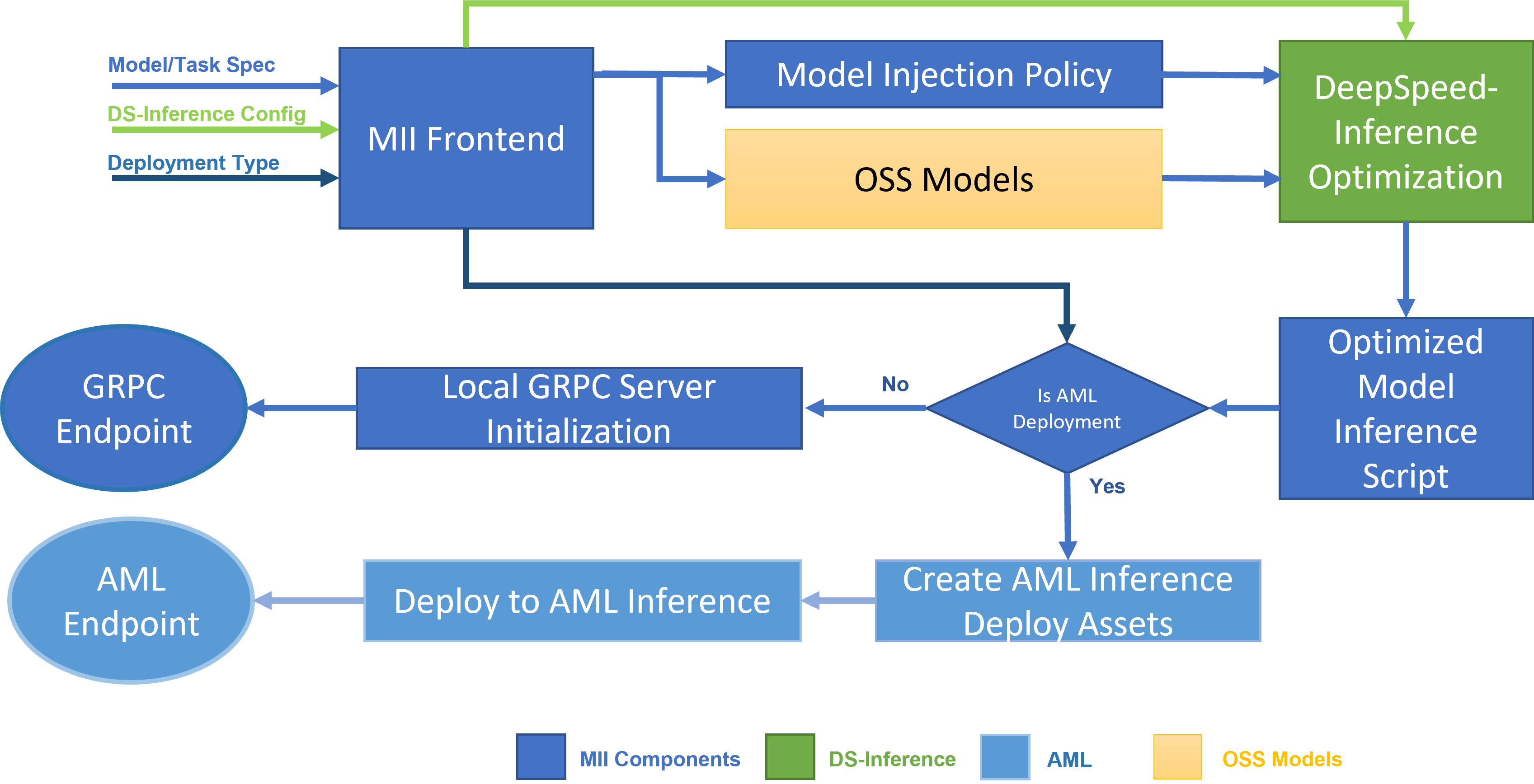 MII supports a growing list of tasks such as text generation, question-answering, text classification, etc, across thousands of transformer models available through multiple open-sourced model repositories such as Hugging Face, FairSeq, EluetherAI, etc. It supports dense models based on BERT, RoBERTa, GPT, OPT, and BLOOM architectures ranging from a few hundred million parameters in size to hundreds of billions of parameters in size. At the same time, it supports recent image generation models such as Stable Diffusion.

See the MII GitHub repo for an up-to-date list of models and tasks supported by MII.

Here we provide a summary of the expansive set of optimizations from DeepSpeed-inference made available via MII. For more details, please refer to [1, 2]:

DeepFusion for Transformers: For transformer-based models such as Bert, Roberta, GPT-2, and GPT-J, MII leverages the transformer kernels in DeepSpeed-Inference that are optimized to achieve low latency at small batch sizes and high throughput at large batch sizes using DeepFusion.

Multi-GPU Inference with Tensor-Slicing: For massive models such as Bloom 176B, MII automatically enables tensor-parallelism within a node to leverage aggregate memory bandwidth and compute across multiple GPUs to achieve the lowest latency and throughput compared to anything else that is currently available.

INT8 Inference with ZeroQuant: For massive models with tens or hundreds of billions of parameters, MII supports INT8 Inference with ZeroQuant. Using this feature not only reduces the memory footprint and the number of GPUs required for inference but also increases the inference throughput by supporting larger batch sizes and using INT8 compute, thus lowering cost compared to FP16.

ZeRO-Inference for Resource Constrained Systems: Models such as Bloom 176B, require over 176 GB of memory to just fit the model even with INT8 support. In the absence of the aggregate GPU memory across multiple GPUs required to deploy such models, MII enables ZeRO-Inference that can leverage the system CPU memory to deploy these massive models with a single GPU with limited memory.

Compiler Optimizations: When applicable, MII automatically applies compiler-based optimizations via TorchScript, nvFuser, and CUDA graph, in addition to the above optimizations, to further lower latency and improve throughput.

MII can work with two variations of DeepSpeed-Inference. The first, referred to as ds-public, contains most of the optimizations discussed above and is also available via our open-source DeepSpeed library. The second referred to as ds-azure, offers tighter integration with Azure, and is available via MII to all Microsoft Azure customers. We refer to MII running the two DeepSpeed-Inference variants as MII-Public and MII-Azure, respectively.

For latency-critical scenarios, where a small batch size of 1 is often used, MII can reduce the latency by up to 6x for a wide range of open-source models, across multiple tasks. More specifically, we show model latency reduction of 1:

Figure 3: Latency comparison for OPT and BLOOM models. MII-Azure is up to 2.8x faster than baseline. 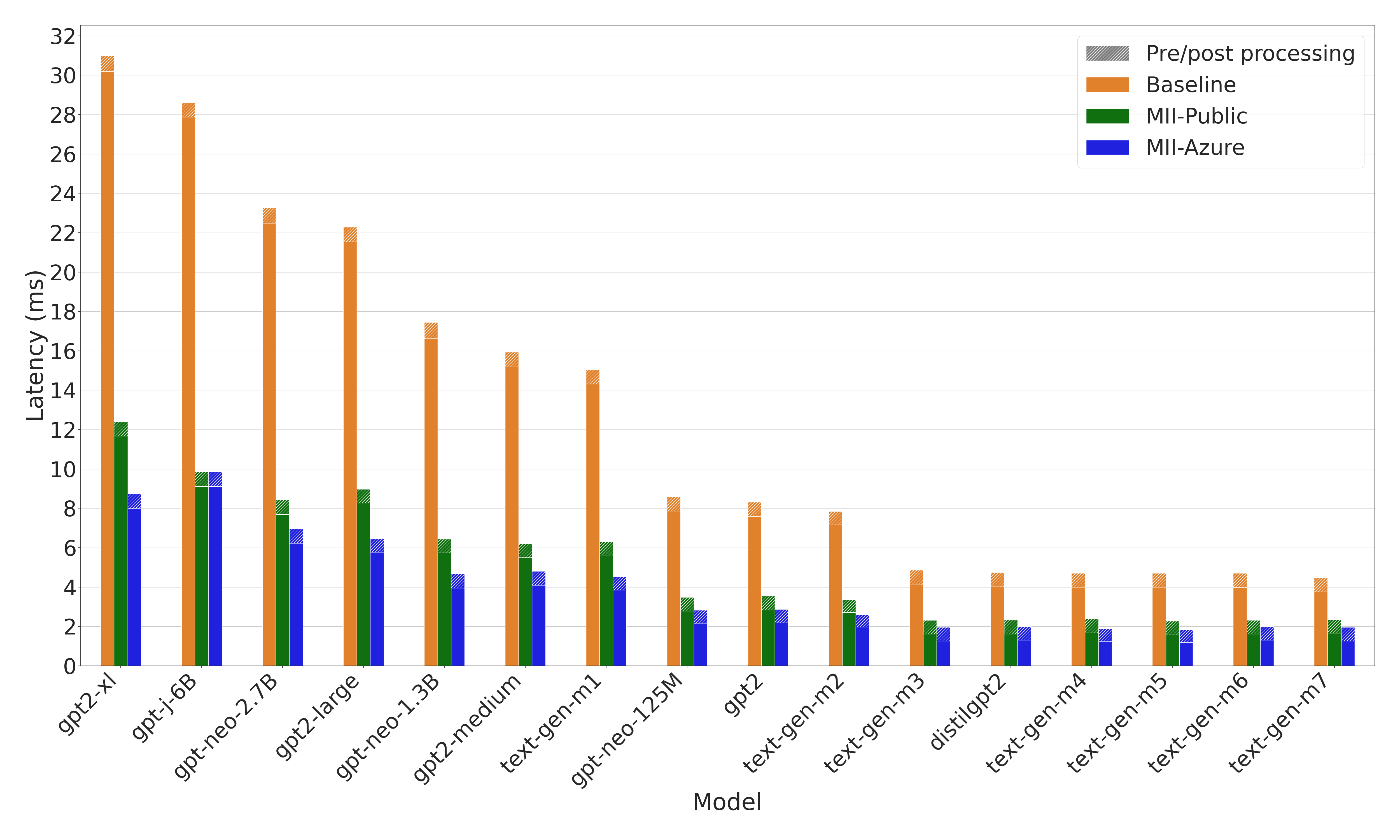 Figure 4: Latency comparison for GPT models. MII-Azure is up to 3x faster than baseline. 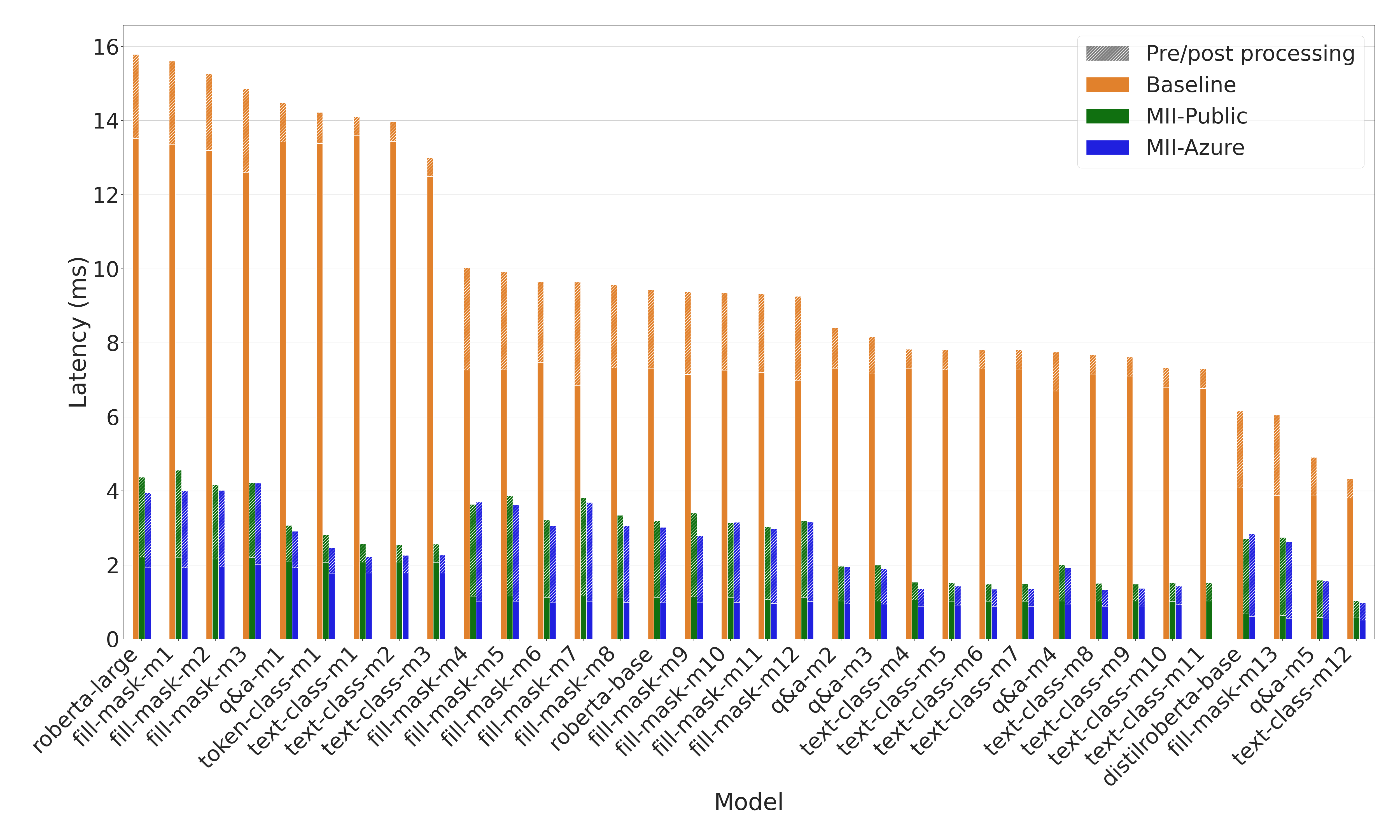 Figure 5: Latency comparison for RoBERTa models. MII offers up to 9x lower model latency and up to 3x lower end-to-end latency than baseline on several tasks and RoBERTa variants 1. 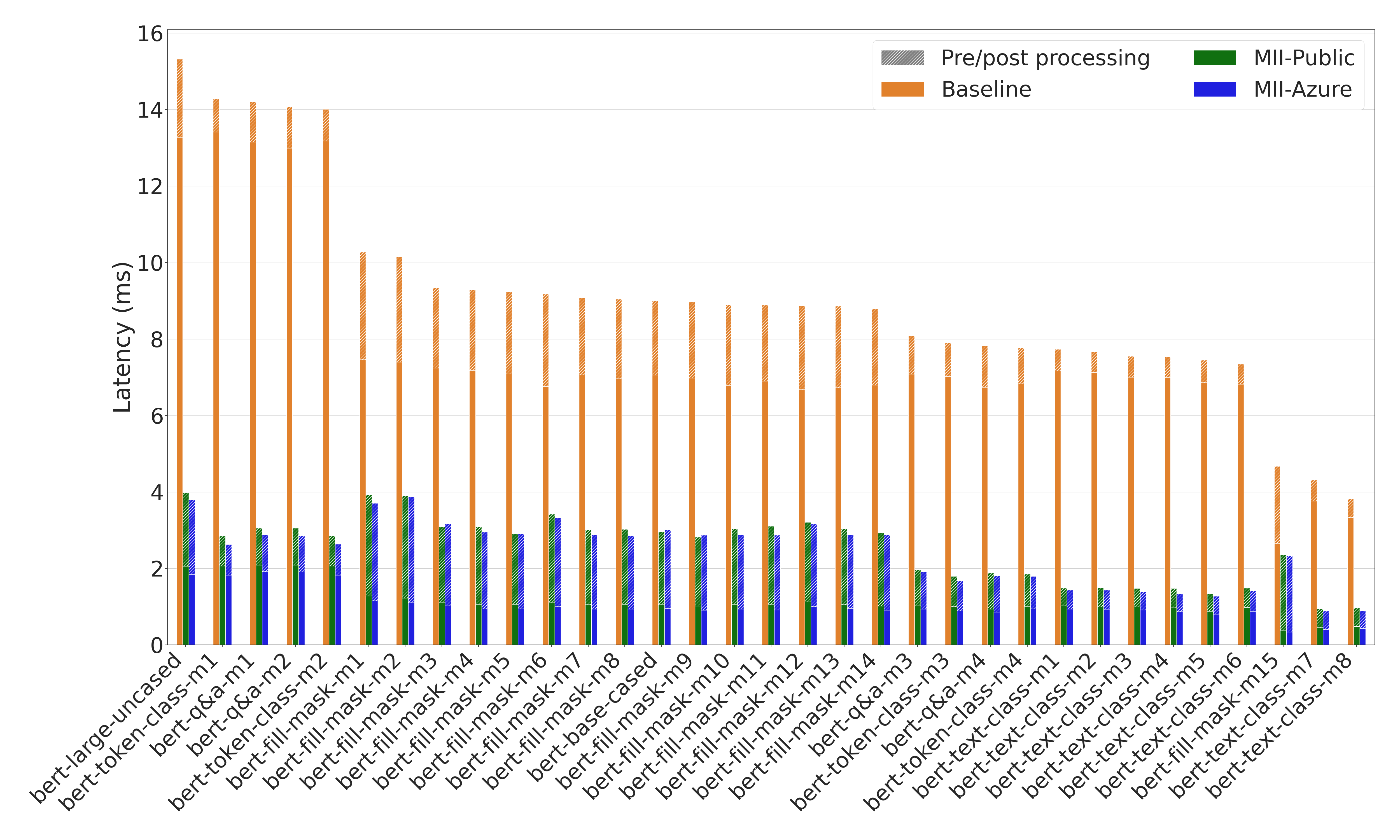 Figure 6: Latency comparison for BERT models. MII offers up to 8.9x lower model latency and up to 4.5x end-to-end latency across several tasks and BERT variants1.

MII can significantly reduce the inference cost of very expensive language models like Bloom, OPT, etc. To get the lowest cost, we use a large batch size that maximizes throughput for both baseline and MII. Here we look at the cost reduction from MII using two different metrics: i) tokens generated per second per GPU, and ii) dollars per million tokens generated. 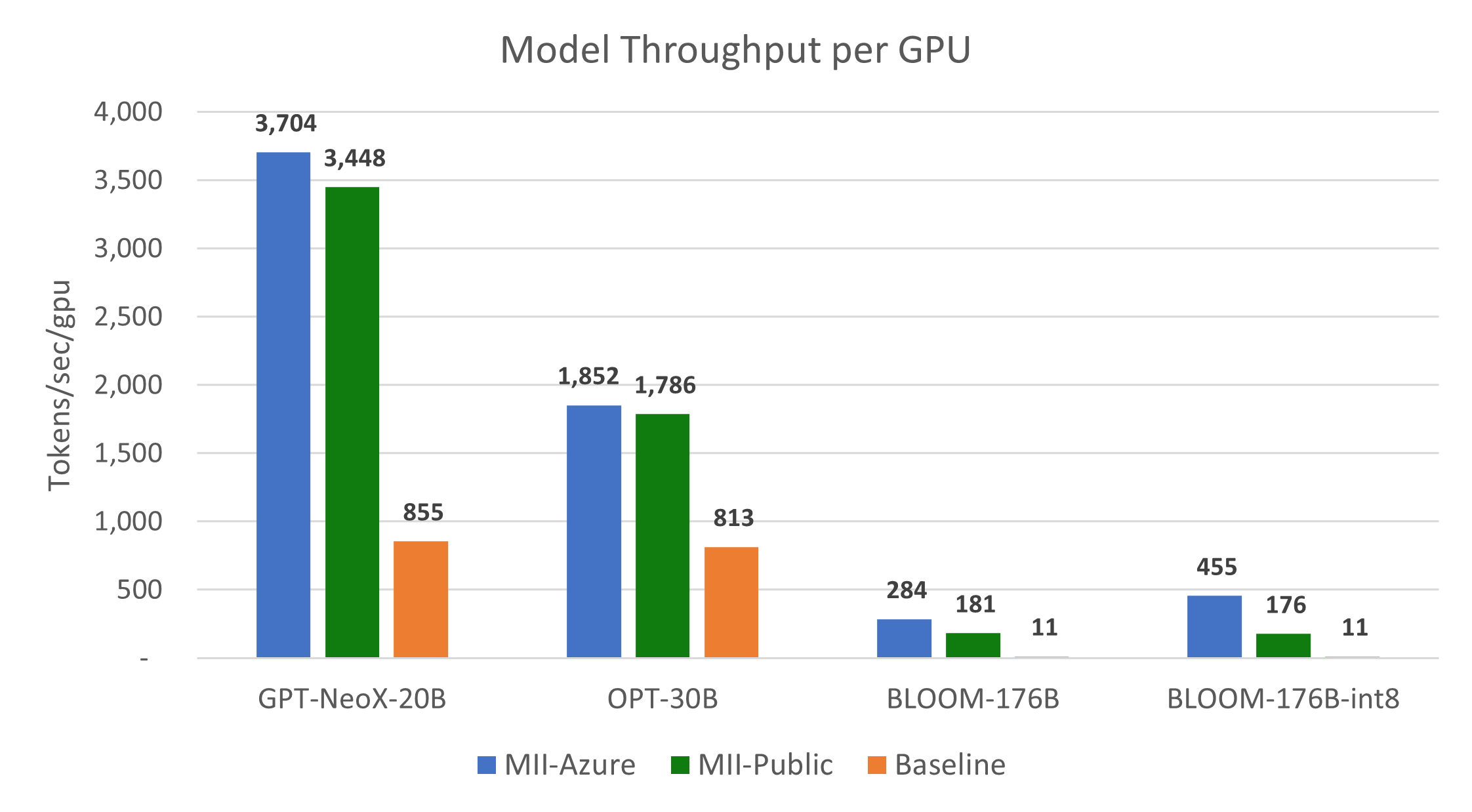 Figure 8: Cost of generating 1 million tokens on Azure with different model types. MII-Azure reduces the cost of generation by over 40x.

MII supported models can be deployed in two different ways as shown in Figure 1 with just a few lines of code.

MII-Public can be deployed on-premises or on any cloud offering. MII creates a lightweight GRPC server to support this form of deployment and provides a GRPC inference endpoint for queries. The code below shows how a supported model can be deployed with MII-Public Deployment.

MII supports deployment on Azure via AML Inference. To enable this, MII generates AML deployment assets for a given model that can be deployed using the Azure-CLI, as shown in the code below. Furthermore, deploying on Azure, allows MII to leverage DeepSpeed-Azure as its optimization backend, which offers better latency and cost reduction than DeepSpeed-Public.

To learn more about these deployment options and get started with MII, please the MII getting started guide.

We are very excited to share MII with the community and improve it with your feedback. We will continue to add support for more models in MII as well as enhance both MII-Public and MII-Azure for both on-premise and Azure users. Our hope is that while open sourcing has made powerful AI capabilities accessible to many, MII will allow for a wider infusion of these capabilities into a diverse set of applications and product offerings by instantly reducing the latency and cost of inferencing.

The table below shows the mapping between model aliases used in Figures 3, 4, 5, and 6 and real model names.