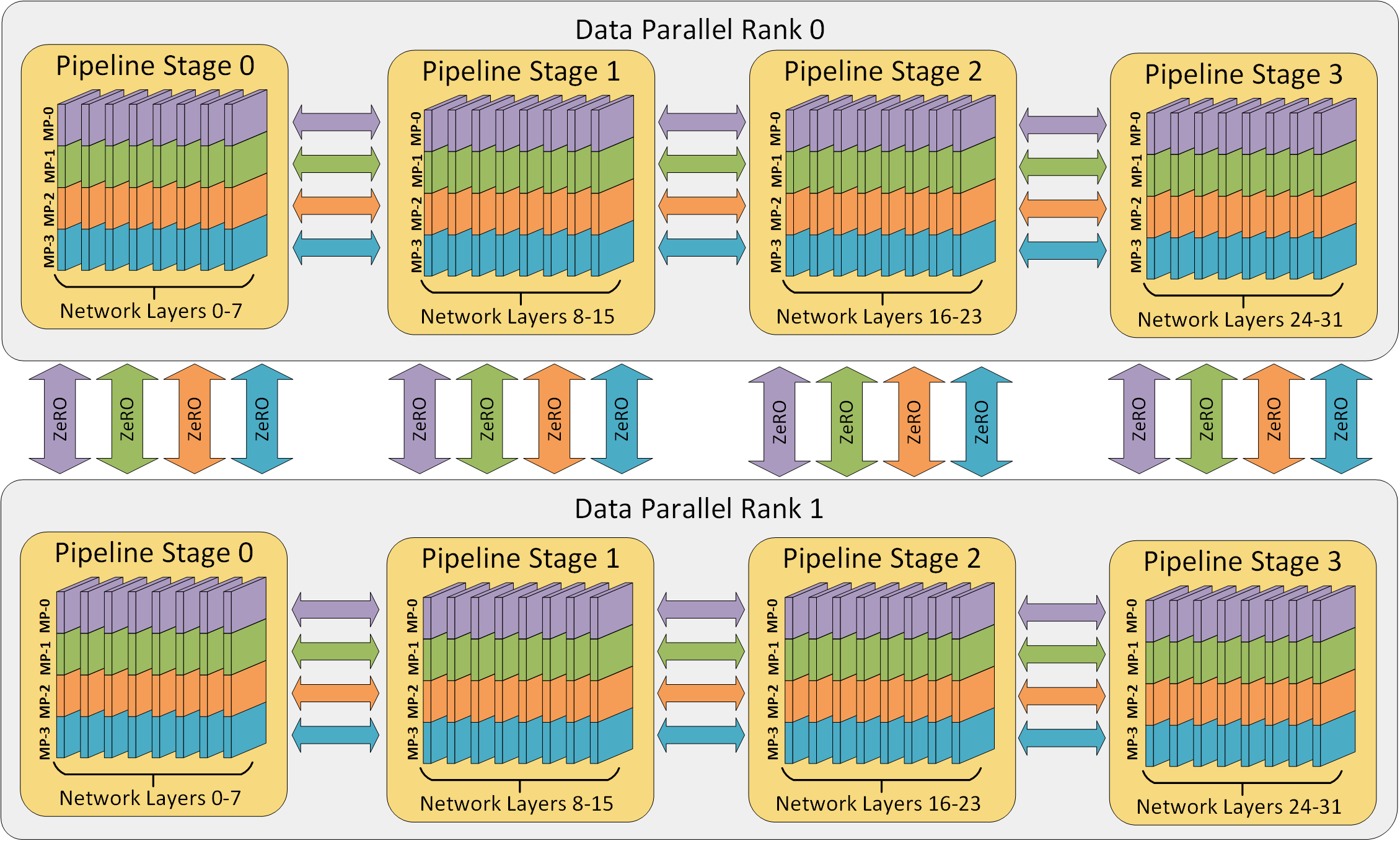 DeepSpeed uses gradient accumulation to extract pipeline parallelism (shown below). Each batch of training data is divided into micro-batches that can be processed in parallel by the pipeline stages. Once a stage completes the forward pass for a micro-batch, the activation memory is communicated to the next stage in the pipeline. Similarly, as the next stage completes its backward pass on a micro-batch, the gradient with respect to the activation is communicated backwards through the pipeline. Each backward pass accumulates gradients locally. Next, all data parallel groups perform reductions of the gradients in parallel. Lastly, the optimizer updates the model weights.

Below is an illustration of how DeepSpeed will train a batch with eight micro-batches using hybrid two-way data parallelism and two-stage pipeline parallelism. GPUs 0 and 2 are arranged in a pipeline and will alternate forward (F) and backward (B) passes. They will then all-reduce (AR) gradients with their data parallel counterparts, GPUs 1 and 3, respectively. Finally, the two pipeline stages update their model weights.

Getting Starting with Pipeline Parallelism

PyTorch’s torch.nn.Sequential is a convenient container for expressing pipeline parallel models and can be parallelized by DeepSpeed with no modification:

PipelineModule uses its layers argument as the sequence of layers that comprise the model. After initialization, net is divided into two pipeline stages and its layers moved to the corresponding GPUs. If more than two GPUs are present, DeepSpeed will also use hybrid data parallelism.

Note: The total number of GPUs must be divisible by the number of pipeline stages.

Let’s look at an abbreviated implementation of torchvision’s AlexNet:

AlexNet is mostly a composition of several Sequential submodules. We can turn this into a PipelineModule by flattening its submodules into a single sequence of layers:

Note: the lambda in the middle of layers above is not a torch.nn.Module type. Any object that implements __call__() can be a layer in a PipelineModule: this allows for convenient data transformations in the pipeline.

Following torch.nn.Sequential, the inputs and outputs of each layer must be either a single torch.Tensor or a tuple of tensors. In practice, some models may need to modify their forward pass to pack and unpack arguments to forward(). Consider an abbreviated implementation of a stack of Transformer blocks:

Two modifications to TransformerBlock are required:

These modifications can be accomplished with a short subclass:

Pipeline parallelism interleaves forward and backward passes, and thus the training loop cannot be divided into separate stages of forward(), backward() and step(). Instead, DeepSpeed’s pipeline engine provides a train_batch() method that advances the pipeline engine until the next batch of training data is consumed and the model weights updated.

The above train_batch() example is equivalent to the following with traditional data parallel DeepSpeed:

Data parallel training typically has each worker perform IO independently at the start of each batch. However, in a pipeline parallel environment, only the first stage uses the input data, and only the last stage uses labels for loss calculation.

Note: The pipeline engine expects data loaders to return a tuple of two items. The first returned item is the input batch data, and the second item is the data to be used in the loss calculation. As before, inputs and labels should be either torch.Tensor type or a tuple of tensors.

For convenience, the DeepSpeed pipeline engine can construct a distributed data loader when a dataset is provided to deepspeed.initialize(). DeepSpeed handles the rest of the complexity of data loading, and so the pipeline training loop becomes:

Of course, DeepSpeed will work with any data loader that you wish to use. Data loaders should be constructed by the first and last stages in the pipeline. Each worker should load micro-batches of size engine.train_micro_batch_size_per_gpu() and will be queried a total of engine.gradient_accumulation_steps() times per train_batch().

Watch out! The pipeline engine pulls data from an iterator instead of iterating over it. It’s critical that the data stream does not empty in the middle of a training batch. Each invocation of train_batch() will pull a total of engine.gradient_accumulation_steps() micro-batches of data from the data iterator.

DeepSpeed provides a convenience class deepspeed.utils.RepeatingLoader that simply wraps an iterable such as a data loader and restarts it whenever the end is reached:

The performance of pipeline parallel training strongly relies on load balance. DeepSpeed provides several mechanisms for partitioning the model across GPUs. These strategies can be set with the partition_method keyword argument to PipelineModule. Here are partitioning methods currently provided by DeepSpeed:

Building a Sequential container and providing it to a PipelineModule is a convenient way of specifying a pipeline parallel model. However, this approach encounters scalability issues for massive models because each worker replicates the whole model in CPU memory. For example, a machine with 16 GPUs must have as much local CPU memory as 16 times the model size.

DeepSpeed provides a LayerSpec class that delays the construction of modules until the model layers have been partitioned across workers. Then each worker will allocate only the layers it’s assigned to. So, comparing to the example from the previous paragraph, using LayerSpec a machine with 16 GPUs will need to allocate a total of 1x model size on its CPU memory and not 16x.

Here is an example of the abbreviated AlexNet model, but expressed only with LayerSpecs. Note that the syntax is almost unchanged: nn.ReLU(inplace=True) simply becomes LayerSpec(nn.ReLU, inplace=True).

Tied layers are replicated on every pipeline stage that owns an instance of reuse. Training then proceeds as normal, but an additional all-reduce of the tied gradients is added after all backward passes complete. The all-reduce ensures that the weights of the tied layer remain in sync across pipeline stages.