Training advanced deep learning models is challenging. Beyond model design, model scientists also need to set up the state-of-the-art training techniques such as distributed training, mixed precision, gradient accumulation, and checkpointing. Yet still, scientists may not achieve the desired system performance and convergence rate. Large model sizes are even more challenging: a large model easily runs out of memory with pure data parallelism and it is difficult to use model parallelism. DeepSpeed addresses these challenges to accelerate model development and training.

The DeepSpeed API is a lightweight wrapper on PyTorch. This means that you can use everything you love in PyTorch and without learning a new platform. In addition, DeepSpeed manages all of the boilerplate state-of-the-art training techniques, such as distributed training, mixed precision, gradient accumulation, and checkpoints so that you can focus on your model development. Most importantly, you can leverage the distinctive efficiency and effectiveness benefit of DeepSpeed to boost speed and scale with just a few lines of code changes to your PyTorch models.

DeepSpeed achieves high performance and fast convergence through a combination of efficiency optimizations on compute/communication/memory/IO and effectiveness optimizations on advanced hyperparameter tuning and optimizers. For example:

DeepSpeed reduces the training memory footprint through a novel solution called Zero Redundancy Optimizer (ZeRO). Unlike basic data parallelism where memory states are replicated across data-parallel processes, ZeRO partitions model states and gradients to save significant memory. Furthermore, it also reduces activation memory and fragmented memory. The current implementation (ZeRO-2) reduces memory by up to 8x relative to the state-of-art. You can read more about ZeRO in our paper, and in our blog posts related to ZeRO-1 and ZeRO-2.

With this impressive memory reduction, early adopters of DeepSpeed have already produced a language model (LM) with over 17B parameters called Turing-NLG, establishing a new SOTA in the LM category.

For model scientists with limited GPU resources, ZeRO-Offload leverages both CPU and GPU memory for training large models. Using a machine with a single GPU, our users can run models of up to 13 billion parameters without running out of memory, 10x bigger than the existing approaches, while obtaining competitive throughput. This feature democratizes multi-billion-parameter model training and opens the window for many deep learning practitioners to explore bigger and better models. 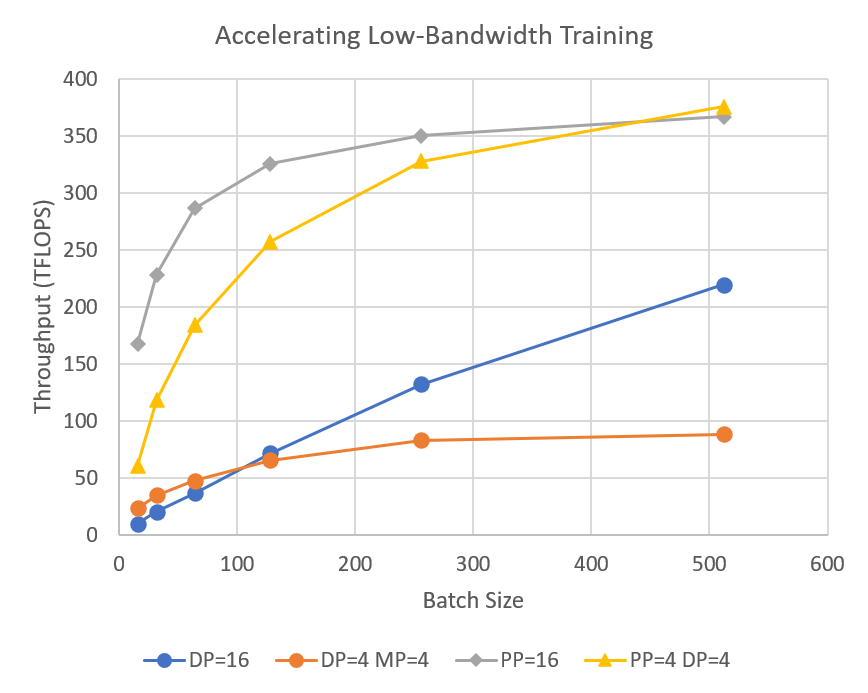 DeepSpeed supports advanced hyperparameter tuning and large batch size optimizers such as LAMB. These improve the effectiveness of model training and reduce the number of samples required to convergence to desired accuracy.

Below we provide a brief feature list, see our detailed feature overview for descriptions and usage.

Enable 16-bit (FP16) training by in the deepspeed_config JSON.

Easily switch between single-GPU, single-node multi-GPU, or multi-node multi-GPU execution by specifying resources with a hostfile.

The script <client_entry.py> will execute on the resources specified in <hostfile>.

DeepSpeed is fully compatible with Megatron. Please see the Megatron-LM tutorial for details.

For more details see the ZeRO paper, GPT tutorial on integration with DeepSpeed.

Optimizer State and Gradient Partitioning in ZeRO reduces the memory consumption of the model states (optimizer states, gradients and parameters) by 8x compared to standard data parallelism by partitioning these states across data parallel process instead of replicating them.

CBO enables high network and memory throughput while restricting memory usage to a constant size. For memory- and network-bound operations such as normalization or allreduce collectives, the performance depends on the size of the operand. Simply fusing all operands into a single large operand can enable great throughput at the expense of unnecessary memory overhead. CBO in DeepSpeed fuses smaller operands into approximately a pre-defined sized buffer large enough to achieve great performance without the unnecessary memory overhead.

ZeRO-Offload pushes the boundary of the maximum model size that can be trained efficiently using minimal GPU resources, by exploiting computational and memory resources on both GPUs and their host CPUs. It allows training up to 13-billion-parameter models on a single NVIDIA V100 GPU, 10x larger than the state-of-the-art, while retaining high training throughput of over 30 teraflops per GPU.

For more details see the ZeRO-Offload release blog, and tutorial on integration with DeepSpeed.

During back propagation, DeepSpeed can overlap the communication required for averaging parameter gradients that have already been computed with the ongoing gradient computation. This computation-communication overlap allows DeepSpeed to achieve higher throughput even at modest batch sizes.

The DeepSpeed core API consists of just a handful of methods:

DeepSpeed supports most of the features described in this document, via the use of these API, along with a deepspeed_config JSON file for enabling and disabling the features. Please see the core API doc for more details.

DeepSpeed handles gradient clipping under the hood based on the max gradient norm specified by the user. Please see the core API doc for more details.

1-bit Adam, 0/1 Adam and 1-bit LAMB optimizers with up to 26x less communication

With DeepSpeed, the user can choose to use a high performance implementation of ADAM from NVIDIA, or any training optimizer that extends torch’s torch.optim.Optimizer class.

We introduce an efficient implementation of Adam optimizer on CPU that improves the parameter-update performance by nearly an order of magnitude. We use the AVX SIMD instructions on Intel-x86 architecture for the CPU-Adam implementation. We support both AVX-512 and AVX-2 instruction sets. DeepSpeed uses AVX-2 by default which can be switched to AVX-512 by setting the build flag, DS_BUILD_AVX512 to 1 when installing DeepSpeed. Using AVX-512, we observe 5.1x to 6.5x speedups considering the model-size between 1 to 10 billion parameters with respect to torch-adam.

DeepSpeed makes it easy to train with large batch sizes by enabling the LAMB Optimizer. For more details on LAMB, see the LAMB paper.

DeepSpeed can simplify checkpointing for you regardless of whether you are using data parallel training, model parallel training, mixed-precision training, a mix of these three, or using the zero optimizer to enable larger model sizes. Please see the Getting Started guide and the core API doc for more details.

DeepSpeed abstracts away data parallelism and model parallelism from the user when it comes to data loading. Users simply provide a PyTorch dataset, and DeepSpeed data loader can automatically handle batch creation appropriately.

DeepSpeed provides a set of tools for performance analysis and debugging.

DeepSpeed provides a detailed breakdown of the time spent in different parts of the training. This can be enabled by setting the following in the deepspeed_config file.

When activation checkpointing is enabled, profiling the forward and backward time of each checkpoint function can be enabled in the deepspeed_config file.

The DeepSpeed flops profiler measures the time, flops and parameters of a PyTorch model and shows which modules or layers are the bottleneck. When used with the DeepSpeed runtime, the flops profiler can be configured in the deepspeed_config file as follows:

The flops profiler can also be used as a standalone package. Please refer to the Flops Profiler tutorial for more details.

The DeepSpeed Autotuner uses model information, system information, and heuristics to efficiently tune Zero stage, micro batch size, and other Zero configurations. Using the autotuning feature requires no code change from DeepSpeed users. While "autotuning": {"enabled": true} is the minimal required to enable auotuning, there are other parameters users can define to configure the autotuning process. Below shows major parameters and their default values in the autotuning configuration. Please refer to the Autotuning tutorial for more details.

The flops profiler can also be used as a standalone package. Please refer to the Flops Profiler tutorial for more details.

The DeepSpeed Monitor logs live training metrics to one or more monitoring backends, including PyTorch’s TensorBoard, WandB, or simply to CSV files. The Monitor can be configured with one or more backends in the deepspeed_config file as follows:

The Monitor can also be added to log custom metrics and client codes. Please refer to the Monitor tutorial for more details.

DeepSpeed provides logging of all communication operations launched within deepspeed.comm. The communication logger can be configured in the deepspeed_config file as follows:

Client codes can then print a summary with a call to deepspeed.comm.log_summary(). For more details and example usage, see the Communication Logging tutorial.

To learn more about training Mixture of Experts (MoE) models with DeepSpeed, see our tutorial for more details.