To illustrate the benefits and usage of 1-bit Adam optimizer in DeepSpeed, we use the following two training tasks as examples:

For more details on these tasks, please refer to the tutorial posts on BingBertSQuAD Fine-tuning and BERT Pre-training.

If you don’t already have a copy of the DeepSpeed repository, please clone in now and checkout the DeepSpeedExamples submodule that contains the BingBertSQuAD and BERT Pre-training examples.

We package the necessary dependencies in the DeepSpeed docker images. However, if you are using a different build system, please install MPI and mpi4py on your system. We have tested CUDA-Aware MPI communication using the MVAPICH2-GDR library. However, any CUDA-Aware communication library including OpenMPI should work fine with these examples.

An example launch command for 1-bit Adam using the deepspeed launcher is as follows:

Alternatively, the standard mpirun launcher can also be used as follows:

The detailed description of the 1-bit Algorithm can be seen from our blog post.

The 1-bit Adam feature can be used by setting the optimizer configuration options as follows. An example json config file is shown below.

Please note two new parameters freeze_step and cuda_aware that have been added to support the 1-bit Adam feature.

cuda_aware is used to indicate that the underlying MPI library support CUDA-Aware communication. This feature is only supported on systems with InfiniBand interconnect and a CUDA-Aware MPI library like MVAPICH2-GDR or OpenMPI built with CUDA-Aware support. Setting cuda_aware to False will allow training on Ethernet based systems. However, the communication will happen using sender as well as receiver side memory copies between CPU and GPU buffers before and after communication.

You can also use a pre-trained BERT model checkpoint from either DeepSpeed, HuggingFace, or TensorFlow to run the fine-tuning.

To enable the 1-bit compressed training, 1-bit Adam uses an MPI library (E.g. MVAPICH2-GDR, OpenMPI, etc.) as the communication backend, which means that we can use mpirun to launchg the training job. However, our user-friendly launcher called deepspeed has been enhanced to launch MPI jobs as well.

The following helper script in the DeepSpeedExamples/BingBertSQuAD will launch the training without the need for setting any mpirun parameters. The number of nodes and GPUs will be automatically detected and the job will be launched on all the available resources.

Alternatively, we show how the standard mpirun launcher can be used for launching the fine-tuning job.

For example, in order to use 32 GPUs (4GPUs/node, 8 nodes in total), with the support of InfiniBand, you can use the mpirun launcher packaged with the MVAPICH2 library. Please run the folowing command:

The deepspeed_onebitadam_bsz96_config.json file gives the user the ability to specify DeepSpeed options in terms of batch size, micro batch size, optimizer, learning rate, and other parameters. When running the nvidia_run_squad_deepspeed.py, in addition to the --deepspeed flag to enable DeepSpeed, the appropriate DeepSpeed configuration file must be specified using --deepspeed_config deepspeed_onebitadam_bsz96_config.json.

Table 1 shows the fine-tuning configuration we used in our experiments.

Accuracy: The results are summarized in the table below. The total batch size is set to 96 and training is conducted on 32 GPUs for 2 epochs. A set of parameters (seeds and learning rates) were tried and the best ones were selected. We fixed the learning rate to 3e-5. The table below shows the F1 and the EM scores we achieved that are on-par or better than the HuggingFace results.

1-bit Adam enables up to 2.7x overall speedup in training speed for SQuAD fine-tuning. This is made possible by up to 6.2x faster througput during the compressed stage of the algorithm as shown in Figure 1. 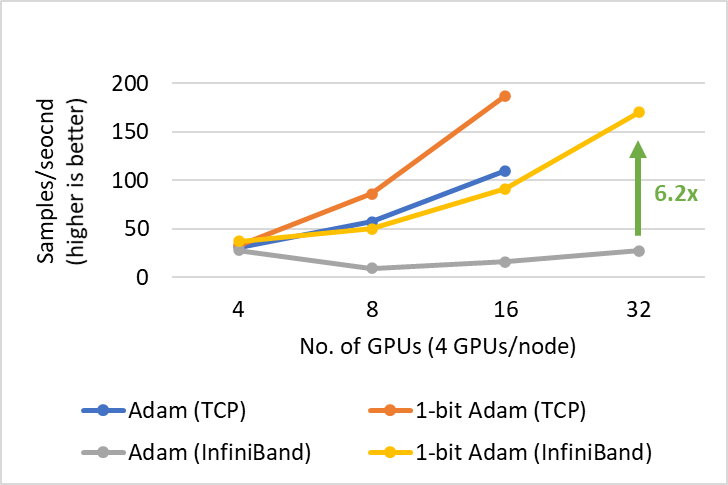 Figure 1: Scalability of 1-bit Adam for SQuAD Finetuning on V100 GPUs with batch size of 3/GPU.

For data downloading and pre-processing, please refer to the BERT Pre-training post.

The main part of training is done in deepspeed_train.py, which has already been modified to use DeepSpeed. The ds_train_bert_onebit_bsz4k_seq128.sh and ds_train_bert_bsz64k_seq128.sh are the shell scripts that help to invoke training and setup several different hyperparameters relevant to the training process.

As discussed for BingBertSQuAD fine-tuning, we can simply use the deepspeed launcher to launch our BERT pre-training jobs as follows.

Alternatively, use the following command to launch using mpirun.

For example, in order to use 32 GPUs (4GPUs/node, 8 nodes in total), with the support of InfiniBand, you can use MVAPICH2 as the launcher and run the following command:

The deepspeed_bsz4k_onebit_config_seq128.json file gives the user the ability to specify DeepSpeed options in terms of batch size, micro batch size, optimizer, learning rate, and other parameters.

Below is the DeepSpeed configuration file for running BERT-large pre-training with sequence length of 128 using the 1-bit Adam optimizer.

The above file is for BERT-large but for BERT-base training (sequence length 128), the suggested freeze_step will need to be changed to 16000. For the rest of the pre-training using sequence 512, we suggest to use a freeze_step of 1500.

Performance results of BERT Pre-training can be seen from our detailed blog post.